I received this ARC from librarian book buzz, where the publisher gave us the ARCs in exchange for honest reviews. 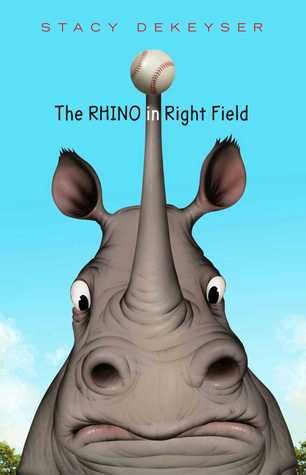 Set in the 1940s, Nick and his friends play pickup baseball games at the local greenspace, which so happens to be in the middle of the city zoo. Nick’s outfield position places him way too close to the Rhino exhibit and sometimes he has to retrieve a stray ball from the rhino’s pen. However, his love of baseball makes him take chances and continue to face his rhino fears. Nick’s family is originally from Greece and they work hard to succeed in America, especially Nick’s father, who works hard at his shoe shop and expects the same from Nick. Saturday’s are devoted to the family business, no matter the baseball games going on at the zoo. Recently someone bought the local baseball team and plans on turning it around and making it fun again. All of the boys are encouraged to take part in a competition of baseball skills to win the opportunity to throw the first pitch at the opening game. Unfortunately, the competition is on a Saturday. Nick’s father won’t let him go and his uncle is up to something, so he won’t cover for Nick in the shop. Nick may just has to resort to unsavory actions to get to the competition.

This novel was cute and interesting. I had hoped there would be illustrations throughout because the illustration on the cover of this book was gorgeous and would have added to the story. It was exactly what I expected to find and certainly explores the concept of work ethic vs all work no play makes Jack a dull boy.