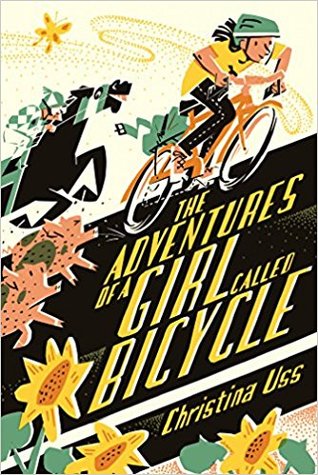 Summary:
Bicycle was an orphan left at the Nearly Silent Monastery, where she has been raised ever since. While she was named after the image on the shirt she was wearing when she was found, her love of bicycles grows as she does. She makes friends with the monks she lives with, even though they can only speak using five different words. She takes her bicycle everywhere, except when guardian Sister Wanda decides she needs to do something different. Bicycle is excited to learn that a famous bicyclist will be visiting San Francisco California, and she is desperate to meet him. However, Sister Wanda has decided that she should go to a camp that guarantees she will make at least three friends. Bicycle is not down for this plan, so she and her trusty bicycle set off. She hopes to ride from the Washington DC area to California, in time to meet her hero. Bicycle makes many friends along the way, all of whom are rooting for her to make it to San Francisco in time.

Newbery Considerations:
This just feels like a Newbery book. The layered plot with detailed characters all interweave to create a dense story. The sentence structure and writing is highly developed and will challenge young readers.