I received this eARC from Edelweiss in exchange for an honest review. 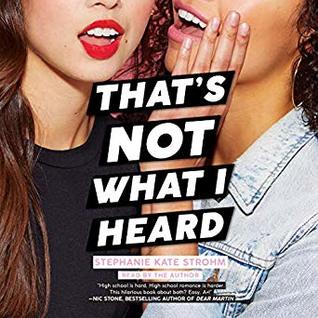 Kim and Teddy have been together forever, almost as if they had never been two separate enemies. They don’t fight, support each other, and are willing to make college work next year, even though they haven’t told the other what college they are going to. However, with the end of senior year looming closer, Kim and Teddy get into a disagreement that some rando freshman overhears. Kim and Teddy broke up, while the freshman doesn’t exactly know why, he decides to “improvise” or create the reason why and pass it along to Kim’s best friend Jess. Now everyone in the school knows why Kim and Teddy broke up, and they have drawn hard lines on which side they support. Teddy supporters begin wearing teddy bear ear headbands and Kim supports begin wearing the color red. The battle lines are drawn and there is no crossing them, even when it comes to prom theme. This novel follows the bizarre upheaval going on in Kim and Teddy’s school, from teachers to the students. Things are getting out of hand and neither Teddy nor Kim knows why the other broke up with them. Can this school find its way back to peace?

This novel was bizarre. It felt like a quintessential dating reality show, where everything is high drama, and everyone feels like they need to speak their piece. I don’t believe that teachers would be pulled into this high school couple drama, but I think it adds to the intensity of plot. It was difficult for me to finish the book because it was just too much…too much melodrama, and I just didn’t care. WHY WOULD AN ENTIRE SCHOOL GIVE A CRAP ABOUT ONE COUPLE? There is enough drama going around in different cliques that the “It” couple would not completely destroy prom theme. If there is a collective school (adults and students included) that would play into this drama…let me know where it is at so I don’t go there.