I received this ARC at BEA last year and I have finally gotten around to it. The fact that I am still reading ARCs from last BEA, is one of the main reasons why I didn’t go to this year’s BEA (though I was a bit sad to miss it). I did fluctuate between reading the ARC and listening to the audiobook. 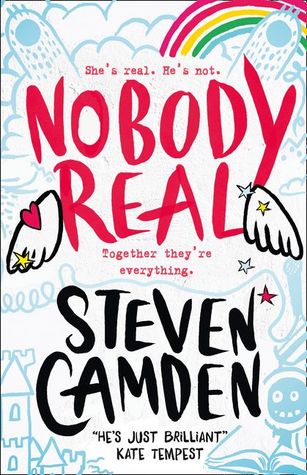 Thor is a young man with claws, who is spending his last few days before taking his final journey into the fade demolishing houses. The girl who dreamed up this imaginary friend, Marcie, sent him away several years ago and it is time for him to move on to the next plane of existence. He misses Marcie terribly. The last demolition job he is given is to tear down Marcie’s house in the imaginary world. Thor uses this as a way to get back to the real and see Marcie.

Marcie is ready to graduate, but doesn’t know what she wants from life. She feels nostalgic for her childhood, though honestly it wasn’t that great of a place. Her mother abandoned her and her father is obsessed with writing a second novel after his first one was a smashing success, which basically means he is never truly around. Marcie lives with her aunt, but she just wants something more. When Thor starts showing up again, she thinks she is going crazy especially because it seems that she has started acting out like a child again. Marcie needs to start demanding what is best for her and Thor may just be the way to do that.

Before reading this book, I was not familiar with the author. The audiobook was well done. I was a bit nervous when I found out that the author read Thor’s part, but he did a great job with it. Turns out, he part of his art is spoken word stories, which makes sense. I thought it was interesting the variety of forms that were used to tell the story. However, I wish there was a better development of the characters, especially Thor. I felt that this novel could have described the appearances of the characters better. As Thor talks about his claws, it wasn’t until further in the book that I realized that they were bear claws. What color is his fur? Is he half bear, half boy? Is he a mismash of many different animals? Is he simply a talking bear? I just needed a better visual picture, which would have made it easier for me to connect to the story. All in all, it was an interesting premise.