The tweens at my local middle school have been required to read a variety of Alan Gratz titles over the summer because he is coming to visit in the fall. I am patiently waiting an invite to the visit, because I so want to hear Gratz speak about his process. I have been reading through his books, since I got an ARC of Refugee a few years ago at BEA. I found out that Gratz has a new book coming out this fall and I have been on the hunt for ARCs that I can give to the tweens at school before he comes. While I have scrounged up three, I made sure to read one before I pass them on. 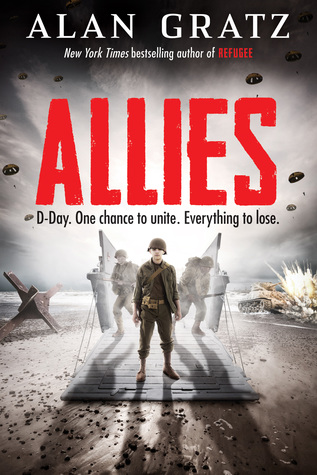 D-Day has finally come and the Allies are ready to storm France and beat back the Nazis. It will take more than one person to ensure that the Allies win this fight. Through several viewpoints, the reader is brought through the day.

Dee is an American soldier who has a major secret. He is German and his family fled before the Nazis truly took over. He is disappointed in what his country has done and plans to right those wrongs as an American solider.

Samira is a young Algerian/French resistance fighter, whose mother is captured by the Nazis. She is committed to help the ally invasion and save her mother, but hopefully she won’t lose her life in the process.

Henry is a African-American medic, who is working on wounded soldiers across the beaches of France. While the soldiers are on the same side to stop the Nazis, he is still experiencing racism.

All of these characters are needed to save lives and stop the Nazis.

This book was extremely engrossing. I didn’t want to put it down. Even though the story quickly moved from perspective to perspective, I was able to follow the story and stay invested in the event. While the book didn’t have a strong extended plot, the character development was off the charts, in true Gratz style. The book did become less interesting in the last few chapters, I still completely enjoyed it. It is perfect for reluctant readers looking for historical fiction.