I received this novel as an eARC through Edelweiss in exchange for an honest review. 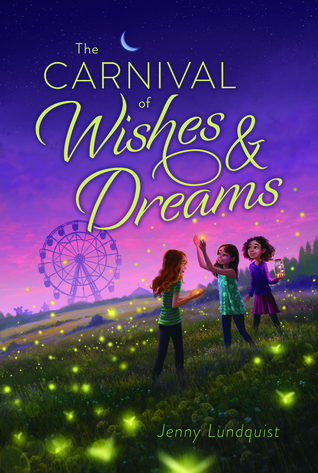 One year ago, Clarkville went from the best place to live to one of hardship and loss. After a fire at a local factory ended in one fatality and its closure, the townsfolk are trying to recover from their grief. Audrey’s father was lost in the fire and tonight is her last day in town. Tomorrow she and her mom will move cross country in an attempt to move on. Grace’s parents have split up and her mother took off with no trace, after  the fire. Grace’s father feels responsible for the fire and she takes on the fallout from her family’s struggle.s Harlow’s parents owned the factory and she is being blamed by her classmates for their parents being without jobs. Harlow is desperate to help her parents bring investors to the town. Each girl receives a mysterious invitation to the local carnival’s Ferris Wheel at midnight. Each pins her own hopes on the strange opportunity, all wish that things will go back to being happy like they were a year ago.

This is a quintessential tween friendship book. It has everything one could ever expect, from mean girls to secret crushes and standing up for who you are. It was enjoyable. The characters were well developed and defined. The magical elements were well integrated. It was a solid middle grade book.