I received this as an ARC from the publisher in exchange for an honest review.

To be honest, I think I only grabbed it because it was short. I have been struggling to read recently. This has never happened to me before. If you have any tips on reader burn out, send them along. 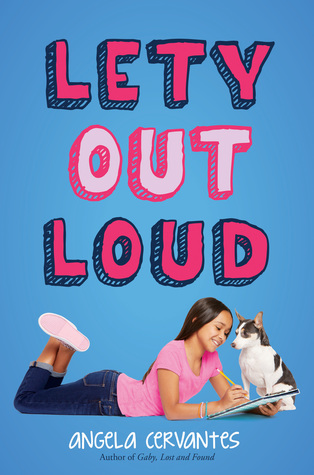 Lety is an English Language Learner, her family is from Mexico, but now they live in the USA. Lety has built friendships with other ELL students, who also know what it is like to have English as a second language. While Lety was supposed to take more language learning classes this summer, she convinced her parents to let her go to a camp at a local animal shelter, with her friends. Lety is super excited to be with the animals, especially Spike, a high-maintenance dog. Lety is determined to do a good job at the camp, so the vet who runs it will let her adopt the dog. Everyone is required to sign up for a job and Lety wants to work on her language skills, so she signs up to be a scribe, or the person who will write personal ads for the animals so that they might get interest enough to be adopted. Lety is not the only one who wants to be a scribe, mean guy Hunter signs up for the job too. These dueling scribes turn it into a contest and whoever gets the most animals adopted from their ads will get to stay the scribe, while the other will have to find a new job. Lety struggles to find her place, but the strong friendships around her (both animal and human) will help give her the confidence to be herself.

I was convinced that this book was part of a larger series, though after looking at GoodReads, it does not appear so….but if you look further, it is a stand-alone novel set in the world created in the book Gaby Lost and Found, so there’s that. The story was simplistic and felt like it could have been developed more. However, I think this will appeal to younger readers who are reading at a higher level, or struggling readers. This cross-section of readers will enjoy the story they find. Also, I think that this book discusses relevant issues about immigrants in America. One of the characters is harassed because they are speaking a different language. The book discusses how these situations make us feel and how we can react to them. I think it will empower young readers and develop a necessary empathy for others.