I enjoyed deVos’s last novel, Fat Girl on a Plane, and I was excited to read her next book, especially when I learned what it was going to be about.

I received this as an eARC from NetGalley in exchange for an honest review. 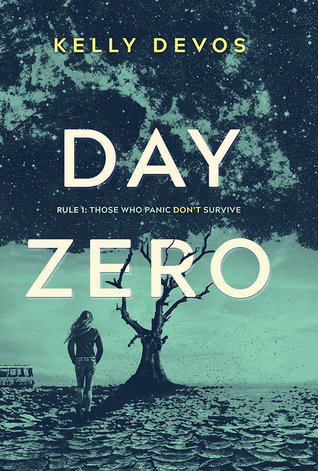 Jinx’s father takes doomsday preparation to an unhealthy level. As she was growing up, he would take their family on prepper drills, so that they would be prepared for when as they knew it finally ended. Jinx’s mother couldn’t handle it any more, so she divorced Jinx’s father and married a new normal awesome guy. While Jinx loves her new stepfather, she has a crush on her older stepbrother, Toby, and can’t stand her stepsister, MacKenna, whose only saving grace is that she loves Jinx’s little brother, Charles, to pieces. Days after a recent contentious presidential election, bombs are set off in banks across the nation. Jinx, MacKenna, and Charles find themselves caught in the middle, but thankfully Jinx’s doomsday prep work is there to save them. The government believes that MacKenna’s dad is responsible for the bombs. Jinx’s mom tells them all to go find Jinx’s missing father, so that maybe he can use his government connections to save her stepfather. All of the adult’s in Jinx’s life seem to know more about the situation than they are staying, but she is determined to keep her brother alive. Along the way, the crew picks up a prepper boy who was sent by Jinx’s father, to stay alive and out of the hands of the government.

Even as I explain the plot, I realize that there is alot going on. There almost seems to be too much story, and maybe certain readers will feel that way. I enjoyed this book and didn’t want to put it down. I had to know what would happen next and how Jinx would address the next challenge. I can’t wait for the final book in this duology because I had a great time with this one.