Hi All!  It’s Becky.  One of Us is Lying was a huge book in 2017.  The sequel was one of the most anticipated books of 2020 and I felt a little obligated to listen to the audiobook.  It took me a while to be able to articulate my thoughts about this book…here they are: 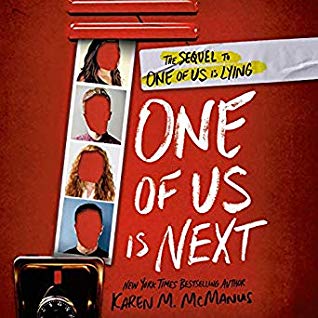 Author: Karen M. McManus
Note: I listened to the audiobook.

Summary: Bayside High School is still reeling from the fallout of a student’s death.  But now there is an even bigger threat to the school, a dangerous game of Truth and Dare being lead by an unknown person who doesn’t care who they hurt.  Phoebe, Maeve, and Knox are all drawn into this dangerous game for different reasons but they have to team up to find out who is pulling the strings behind the game before someone else gets hurt.

Review: I have a complicated relationship with Karem M. McManus’s books.  I am one of the few people that didn’t really care for One of Us Is Lying. You can watch our review here:

But I really liked Two Can Keep a Secret. You can watch our review here:

I was hoping that I would have a reaction to One of Us Is Next similar to Two Can Keep a Secret but unfortunately, my reaction was way more in line with my reaction to One Of Us Is Lying.  One of Us Is Next picks up shortly after One of Is is Lying as we revisit characters from the first novel with new characters mixed in.  However, none of these characters really popped for me.  I didn’t actually remember which character has been in the first novel and I had difficulty keeping track of which female character was who.  At first, I blamed the audiobook for this issue however I quickly realized that if the book had strong narrative voices the audiobook wouldn’t have any impact on it.  Also, I found myself not at any point caring about these characters who were being put in dangerous situations.  I honestly didn’t care if anyone died.  I probably would have been happy because it would have sped up the book.  Plus. the pacing for the novel felt off with there being several big reveals that didn’t quite fit.  It was as if McManus wasn’t sure how she wanted to end the book and was just going to keep writing until she ran out of ideas.  Also, I have to wonder if this story needed to be a sequel.  The story of a dangerous game of Truth and Dare was a great idea and would have stood on its own, shoehorning in the characters from the first novel was distracting and lessened the overall story.  Plus, the final killer and motivation behind the murders were pretty obvious.  I will keep reading McManus’s books because Two Can Keep a Secret was amazing but I don’t think I will be willing to revisit the Bayside High School again.