I am still tunneling my way out of my ARC backlog. I received this eARC through Edelweiss. I had no idea what to expect from this book and the apocalypse vibe is totally fitting for the world today. 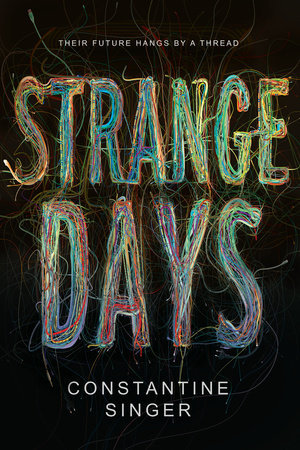 Alex is part of a pseudo street gang, basically he is a stoner that hangs around tagging with his friends. Recently, he has been hearing guitar sounds around him with no actual source. He thinks he is going crazy and his friends and family are believe it too. However, Alex thinks that it might also be connected to these incursions happening around the world, where people are getting abducted by aliens. When Alex comes home one night, his parents have been murdered by a locust alien and the only thing that saved him was a new piece of live-tech that showed up. Alex is on the run from the police, who think he killed his parents. Tech billionaire, Jeff Sabazios, brings Alex into a group of other teens who are tasked with seeing into the future and saving the world. Is everything as it seems?

The mystery surrounding the aliens and who the good guys really are kept me moving through the story. While this novel is long, I blew quickly through it because I was so interested. In fact, this novel has the potential of a high rating, however, the way characters were described felt borderline offensive. For example, one character is described as being gay based on his voice. While this is an offensive remark, is it told through the guise of the ignorant main character, who grows throughout the novel, or should it simply not be part of the story at all (is it truly relevant). I still liked the characters and the concept. I would even consider reading more from this world.