I received this ARC in the flurry that was BEA. I got it in exchange for an honest review. 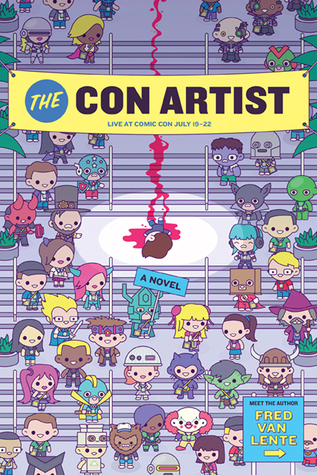 Mike Mason has achieved reasonable success as a comic book artist. He got his start with the well-known artist Ben K, who was responsible for creating the immensely popular Mister Mystery. More recently (but not recent enough), Mike’s graphic novel was turned into a movie. Now, the only thing he has going for him is the commissions he makes a Comic Cons, since his wife has left he and he hasn’t felt inspired to create any new stories. Mike travels from con to con, with no permanent address or connection to anything in the world. He hopes that he will cross paths and make up with his ex-wife at the San Diego Comic Con. Upon first arrival, he overly eager volunteer helper tells him about the death of Ben K, which shocks Mike to the core. After a night of debauchery, another person is found dead and Mike is the prime suspect. Mike connects with old friends and other alibis to clear his name, even as the body count continues to rise.

This was a quick mystery, but I don’t necessarily know who this book would appeal to. I wish there were more illustrations throughout, this actually would have worked well as a graphic novel. I don’t know if typical mystery readers would find the actual mystery plot line interesting enough to stay around. The characters were unlikeable, though that may charm some readers. There were interesting plot points surrounding how Mike solves the mystery, like where he finds camera footage of a night in question. There wasn’t enough of any one thing to appeal to a broad range of readers, but I think there are readers for this book out there. I really liked the cover, though it was too cutesy for the story found inside.